Don't Ask a Krussel What They Did This Summer!!!!

As we reached the end of July, I started to worry about THE question.  But then, a miracle.... All of the illnesses and new diseases finally paid off!  The thousands of dollars we have spent on office visits, blood tests, strep tests, and scopes earned us an offer from our pediatrician  who insisted that we use his condo in Florida for a few days.  ( I think we can claim at least the master bedroom closet in the condo as being completely paid for by Krussel illnesses).
We were bold and daring, packed up like we were taking five elderly people with us complete with Miralax, five different lotions, vitamins, allergy medicines, inhalers, nose sprays, special soaps and more gluten free food than you could shake a stick at and headed south.  It was fantastic but we’re still Krussels……three of us were stung by jelly fish, one suffered massive amounts of water in the ear despite a custom ear plug, another experienced her skins revolt against sand, salt and sun and yet another discovered that her foot was broken.  Benadryl, ear drops, lotions, and a lot of gumption got us through and amazingly fond memories muted the typical Krussel crap.  I was just pleased that an ambulance and pediatrician were not needed. Most importantly, my kids have sea shells, bags of sand and pictures to produce as proof that their summer was not a total loss!  Without that trip, someone was bound to answer THE question with…..”All the girls got Silly Ack Disease so we ate beets, made dirt, went to lots of doctors and saw Mabels gizzards on tv.” 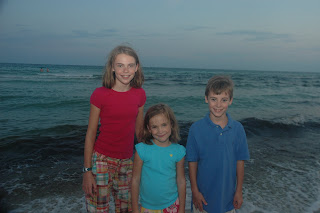 Add your email address below to receive new posts!